JDRF and Our Story of Type 1 Diabetes 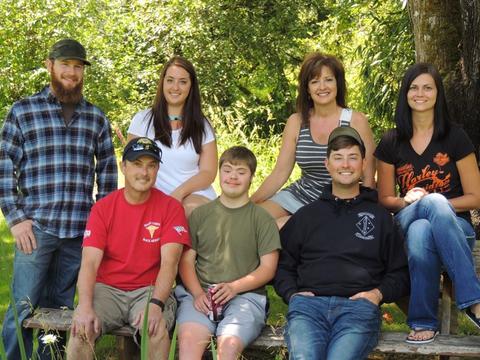 Spring 2010….
David, my husband of almost 23 years, and I have 3 children: 18 year old twins Lacey and Jake-- who are graduating from high school in June and Ryan who is 14 and in the 8th grade. When we were expecting Ryan, we were living what we thought was the perfect life. We both had good jobs, 2 healthy children and were very excited over the arrival of a third. Ryan was born on Sept 6, 1995.

A crushing blow came when Ryan was 9 days old--we found out that our beautiful baby boy had Down syndrome. However, at that moment in time you could not have told us that the biggest challenge was yet to come. At 7 weeks old and only 6 lbs, Ryan became very ill in the middle of the night and we rushed him to the hospital. Hours later the doctor came to us and in disbelief, told us that Ryan’s blood sugar level was over 1300! He was diagnosed with type 1 diabetes.

The next two weeks were spent in the hospital just trying to maintain his glucose levels. At one point, he had a seizure and the Doctor told us that his condition was out of his hands. That was anything but comforting to us, but, determined to do everything we could for Ryan, we called a priest and in the middle of the night we had him baptized, which we hadn’t even gotten the opportunity to do because he was only 7 weeks old. We made it through those first few weeks and were eventually able to bring him home.

Looking back over the last 14 years, I don’t remember many details about the first couple years except that every day was a challenge just to keep Ryan alive. A simple trip to town might consist of him falling asleep in his car-seat and me having to pull over to check his blood sugar because I didn’t know if he was unconscious due to low blood sugar or if he was just simply a sleeping baby. David and I have always tried very hard not to let Lacey and Jake think that our lives are limited because their little brother has diabetes. So we tried to live as normal a life as possible. Many times I would think, “Oh man, it would be easier just to stay home.” And yes it would have, but certainly not as much fun!

I stayed home with the kids for nine years living and breathing Ryan’s diabetes 24/7 before the greatest thing came into our lives….THE INSULIN PUMP. Which, by the way, I’m proud to say came about in part thanks to JDRF’s funding of groundbreaking research. I have to tell you the insulin pump was life altering for Ryan and myself. I felt like we both acquired so much needed freedom and it managed his diabetes so much more efficiently. I felt better because he felt better! That same year I actually had the thoughts of “what was I going to do with my life now!” So, I started a business—a knit shop-- that I absolutely love. Everyday Ryan rides the bus after school to the shop and we drive home together. Up until recently, I thought “Life was good.”

In one of his regular diabetes clinic visits last December, his pediatrician noticed that his protein levels were elevated. After further testing, it showed to be elevated even more. We were then referred to a nephrologist and until two months ago, I didn’t even know what that was! It was determined that Ryan was possibly having kidney failure and needed a biopsy to tell for certain. With the heaviest of hearts, that Friday morning we headed to the hospital. That was the longest and quietest hour drive ever, as David and I could barely speak of it. We were headed to the hospital, entrusting our son’s well-being to doctors we had never met and a procedure that sounded horrendous. I am a little bit of a control freak when it comes to managing Ryan’s diabetes, as I believe that continuity of care is the key to his good health, so I was very adamant that I wanted to remain in complete control of his diabetes care while in the hospital. Everyone was so kind and more than accommodating to our needs and requests, so I was allowed to go with Ryan to where they were to do the procedure, checked his blood sugar, and watched as they administered the sedative. He went face down into his pillow saying, “and he’s my best pal” referring to his dog Mick. I was then escorted out of the room.

That night I laid with him in his hospital bed while he slept. We were scared to death of the unknown and what it could mean for Ryan. I can honestly say that I have never felt such heart ache in all my life. Probably because we have come to know what an incredible human being Ryan truly is. Every single day he amazes me and through this whole ordeal he has not shed one tear. He might tell the doctor who refuses take his iv out that she is “lame”, but he doesn’t cry about it.

Ryan was diagnosed with ANCA vasculitus of the kidneys, which in short means his own body is attacking his kidney function. Treatment is huge amounts of steroids and chemotherapy and HOPEFULLY, it will work. We were told it is important to understand that steroid use causes the glucose levels to elevate. Well that was an understatement of the year! By his first evening of treatment his levels started to rise and I kept checking him and giving insulin via his pump. We all worked together to try to stop Ryan’s blood sugars from continuing to go up, but by 2 am they were pushing 600. It didn’t seem that we could pump enough insulin into him. As always, diabetes remains our biggest concern. The Dr. came in and told me to give Ryan 20 units of insulin and I thought “holy moly, this guy is crazy, the maximum Ryan has ever gotten was 6 units at one time, he is going to crash if I give him that much!” Mothers intuition aside, we took his advice and thankfully by morning Ryan’s blood sugar was down to 200.

After several days of Steroid and Chemotherapy treatment we went home with18 pills a day for Ryan to take. Never one to complain, he just swallows them like a trooper one by one. After a month of this, we then had to return to the hospital for stronger meds as the current plan wasn’t working. This came on the only sunny day of our spring break and I had promised Ryan, that the two of us and Mick, his best pal, would go to Lake Mayfield to start clean up on our lot for the summer. He absolutely loves it up there and was so excited all week to go. When I told him that we had a change of plans and had to go back to the hospital, I heard him banging around in his room for his suitcase and mumbling “stupid hospital, ruining my vacation with my dog!” I felt terrible for him!

Ryan gives me such determination to stay strong and every time I feel a little self-pity, I give myself a little kick in the rear, and tell myself, if he has to go through it, the least I can do is buck up and be there for him. I can honestly say that between the two challenges Ryan has had his whole life, we deeply wish he ONLY had Down syndrome.

We know there are countless worthwhile charities to support, but if you are unfortunate enough for yourself or someone in your family, to be affected with diabetes, we encourage you to get involved with your local chapter of the Juvenile Diabetes Research Foundation. They have countless ways to play an active role in helping to find a cure....Recently, for their senior project, our older two kids organized a walk that they held at Ryan's middle school and raised $7,000! Proud Momma here! As a family, we have organized community walks in our little town and in 2 years raised $65,000!!! JDRF holds many walks, gala's, bike rides, etc all over the country These are just a few examples and I encourage you to contact your local chapter and see what interests you and your family.

Ours happens to be the Oregon/Southwest Washington Chapter. We have been fortunate enough to be involved with the fine people of this chapter over the years, and they are truly dedicated to not only education and support on management of the disease, but in providing funding for research in finding a cure! So if you feel inclined to join us in putting these people OUT OF BUSINESS once and for all, please give generously! Donate Now